The training included using firearms that had been converted to fire plastic training rounds that are not considered lethal ammunition to provide a more realistic training experience. During a break from the training, Officer De Kraai and a second team member left the training area, switching out their training weapons for their duty weapon.

Upon returning to the training area, Officer De Kraai asked to be struck with one of the non lethal plastic rounds so he would know what to expect during training. Another team member agreed to conduct the demonstration. The team member drew his firearm and fatally shot Officer De Kraai, forgetting he had switched out his weapon. 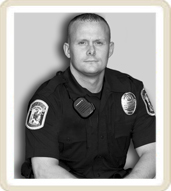